Last year at this time I was deep in grief.  Five months earlier, I woke up one beautiful spring morning to discover Miss M (one of two rescue cats) was struggling to breathe.

From the moment of adopting her more than seven years before, I had been aware she had a heart murmur; Miss M never seemed to know that though.  She was a purring machine.  She was an affection machine.  She was queen of all she surveyed; she was Miss M.  Turned out the heart murmur wasn’t the problem.  Miss M had two sizable growths that compressed her heart and lungs.  Less than two hours from waking up and seeing her breathing difficulty to the discovery of the growths, I held Miss M and cried as my vet gave her the injection that euthanized and released her from this life. 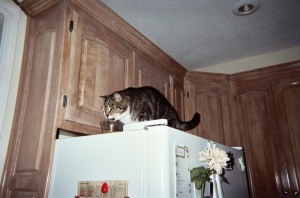 When I got home, my other cat Barkley didn’t even seem to notice Miss M was missing.  I had adopted them at the same time.  Although they were not friends at the start, they moved into tolerating each other and then seemingly became friends as they presented a united cat front against unwanted attentions from my young nephews.  Three years later Miss M and Barkley formed a close bond after our move from Northern Virginia to Missouri. So I expected him to display some form of cat grief.  But Barkley seemed … not relieved … he seemed clueless. It was as if he had been waiting his turn for my full attention and affection through all the years of sharing it with Miss M.  (She didn’t really share … she was a big presence cat.)

And then Barkley began to display more symptoms of aging and failing body systems. He had very high blood pressure; he had balance problems. No more jumping and climbing onto counters and the top of cabinets.  Lots of daily medications and trips to the vet.  More troubling, he displayed litter box issues and developed kidney problems.  Barkley needed weekly fluids and quickly moved to daily injections.  Barkley was in decline; I knew his time here was shortening.

In the meantime, I graduated from Unity Institute and Seminary in early June and was also ordained by Unity Worldwide Ministries.  I wasn’t ready to be finished with school; it had been a goal for so long.  I did not realize that really I was grieving when I was angry or sad that classmates were moving away to their new ministries (or to their homes).  I thought all the sadness, all the emotion was about Barkley’s sickness and his nearing death and the loss of Miss M.

Sometimes it is in looking back that we see how grief shows up and operates in our lives.  Miss M and Barkley were my daily family.  I miss them still.  My classmates, the UI faculty and staff were my weekly family, my community, and I miss them still.

Enter your information HERE for our free monthly newsletter.
“Grief is the natural process whereby you redefine a relationship. Resolution occurs when you can walk through the memories without intense pain.”